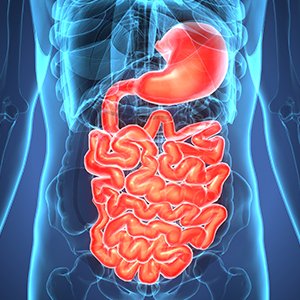 Irritable bowel syndrome (IBS) is a common disorder of the intestines that leads to crampy pain, gassiness, bloating, and changes in bowel habits. Some people with IBS have constipation (difficult or infrequent bowel movements); others have diarrhea (frequent loose stools, often with an urgent need to move the bowels); and some people experience both. Sometimes the person with IBS has a crampy urge to move the bowels but cannot do so.

Through the years, IBS has been called by many names–colitis, mucous colitis, spastic colon, spastic bowel, and functional bowel disease. Most of these terms are inaccurate. Colitis, for instance, means inflammation of the large intestine (colon). IBS, however, does not cause inflammation and should not be confused with another disorder, ulcerative colitis.

The cause of IBS is not known, and as yet there is no cure. Doctors call it a functional disorder because there is no sign of disease when the colon is examined. IBS causes a great deal of discomfort and distress, but it does not cause permanent harm to the intestines and does not lead to intestinal bleeding of the bowel or to a serious disease such as cancer. Often IBS is just a mild annoyance, but for some people it can be disabling. They may be unable to go to social events, to go out to a job, or to travel even short distances.

Colon motility (contraction of intestinal muscles and movement of its contents) is controlled by nerves and hormones and by electrical activity in the colon muscle. The electrical activity serves as a “pacemaker” similar to the mechanism that controls heart function. Movements of the colon propel the contents slowly back and forth but mainly toward the rectum. A few times each day strong muscle contractions move down the colon pushing fecal material ahead of them. Some of these strong contractions result in a bowel movement.

Because doctors have been unable to find an organic cause, IBS often has been thought to be caused by emotional conflict or stress. While stress may worsen many symptoms including IBS symptoms, research suggests that other factors also are important. Researchers have found that the colon muscle of a person with IBS begins to spasm after only mild stimulation. The person with IBS seems to have a colon that is more sensitive and reactive than usual, so it responds strongly to stimuli that would not bother most people.

Ordinary events such as eating and distention from gas or other material in the colon can cause the colon to overreact in the person with IBS. Certain medicines and foods may trigger spasms in some people. Sometimes the spasm delays the passage of stool, leading to constipation. Chocolate, milk products, or large amounts of alcohol are frequent offenders. Caffeine (in coffee, in particular) causes loose stools in many people, but it is more likely to affect those with IBS. Researchers also have found that women with IBS may have more symptoms during their menstrual periods, suggesting that reproductive hormones can increase IBS symptoms.

If you are concerned about IBS, it is important to realize that normal bowel function varies from person to person. Normal bowel movements range from as many as three stools a day to as few as three a week. A normal movement is one that is formed but not hard, contains no blood, and is passed without cramps or pain. Though three stools a week may be “normal” for some individuals, it is not optimal over a lifetime, as the bowel lining has much increased time for exposure to toxins that are part and parcel of an increasingly contaminated food source. This increased exposure to toxins as a result of less frequent stools can result in increased cancer risk.

People with IBS, on the other hand, usually have crampy abdominal pain with painful constipation or diarrhea. In some people, constipation and diarrhea alternate. Sometimes people with IBS pass mucus with their bowel movements. Bleeding, fever, weight loss, and persistent severe pain are not symptoms of IBS but may indicate other problems.

IBS usually is diagnosed after doctors exclude the presence of disease. To get to that point, the doctor will take a complete medical history that includes a careful description of symptoms. A physical examination and laboratory tests will be done. A stool sample will be tested for evidence of bleeding. The doctor also may do diagnostic procedures such as x-rays or endoscopy (viewing the colon through a flexible tube inserted through the anus) to find out if there is disease. At Great Smokies Medical Center, we rule out several possible causes that could cause symptoms similar to IBS such as chronic bacterial or yeast infections and parasitic infestations through a Comprehensive Digestive Stool Analysis. We also rule out intolerance of food from any cause, including but not limited to food allergy, gluten intolerance, and lactose intolerance. In addition, knowing that IBS can be the result of a disturbance in the autonomic nervous system, we would assess any problem with the sympathetic nervous system (which readies a body for “fight or flight”) through Heart Rate Variability monitoring. We would also do a nutritional assessment, of minerals in particular, to see if the downstream effects of IBS have nutritionally compromised the affected person.

The potential for abnormal function of the colon is always present in people with IBS, but a trigger also must be present to cause symptoms. The most likely culprits seem to be diet and emotional stress. Many people report that their symptoms occur following a meal or when they are under stress. No one is sure why this happens, but scientists have some clues.

Eating causes contractions of the colon. Normally, this response may cause an urge to have a bowel movement within 30 to 60 minutes after a meal. In people with IBS, the urge may come sooner with cramps and diarrhea. For some, the strength of the response can be related to the number of calories in a meal and especially the amount of fat in a meal. Fat in any form (animal or vegetable) can be a strong stimulus of colonic contractions after a meal. Many foods contain fat, especially meats of all kinds, poultry skin, whole milk, cream, cheese, butter, vegetable oil, margarine, shortening, avocados, and whipped toppings. Grains are among the common culprits in those with food allergy accounting for bowel symptoms. Large meals can cause cramping and diarrhea in people with IBS. Symptoms may be eased if you eat smaller meals more often or just eat smaller portions.

Stress may also stimulate colonic spasm in people with IBS. This process is not completely understood, but scientists point out that the colon is controlled partly by the autonomic nervous system. Stress reduction (relaxation) training or counseling and support help relieve IBS symptoms in some people. However, this does not mean IBS is the result of a personality disorder. IBS is at least partly a disorder of colon motility. Whether or not stress is a direct cause of IBS or not, the symptoms of severe IBS can themselves often cause stress in the life of the affected individual.

For many people, eating a proper diet lessens IBS symptoms. Before changing your diet, it is a good idea to keep a journal noting which foods seem to cause distress. Discuss your findings with your doctor. For instance, if dairy products cause your symptoms to flare up, you can try eating less of those foods.

Dietary fiber may lessen IBS symptoms in many cases. Beans, fruits, and vegetables are good sources of fiber. Consult your doctor before using an over-the-counter fiber supplement. High-fiber diets give the stool more bulk, which may help to prevent spasms from developing. Some forms of fiber also keep water in the stools, thereby preventing hard stools that are difficult to pass. Click here for more information on types of fiber. Doctors usually recommend that you eat just enough fiber so that you have soft, easily passed, and painless bowel movements. High-fiber diets, particularly cellulose fiber, may initially cause gas and bloating, but within a few weeks, these symptoms often go away as your body adjusts to the fiber. Pectin, a water soluble fiber, is generally better tolerated

Your doctor may prescribe fiber supplements or occasional laxatives if you are constipated. Some doctors prescribe drugs that control colon muscle spasms, drugs that slow the movement of food through the digestive system, tranquilizers, or antidepressant drugs. At GSMC we prefer to first identify any cause of symptoms and remove that cause if possible. It is important to follow the physician’s instructions when taking IBS medications–particularly laxatives, which can be habit forming if not used carefully.

IBS has not been shown to lead to any serious, organic diseases. No link has been established between IBS and inflammatory bowel diseases such as Crohn’s disease or ulcerative colitis. IBS does not lead to cancer. Some patients have a more severe form of IBS, and the pain and diarrhea may cause them to withdraw from normal activities. These patients need to work with their physicians to find the best combination of avoidance of contributing causes, medicine, diet, counseling, and support to control their symptoms.

If you would like to find out more contact us to learn more or to schedule an appointment with our providers at our Asheville office.

Not near our Asheville office?

No problem, our Providers are accessible to
you no matter where you are.

Use the form below to request an appointment with one of our providers or to request more information. You will receive a call back from our team for scheduling.